A Backstage Look at the Rainforest World Music Festival 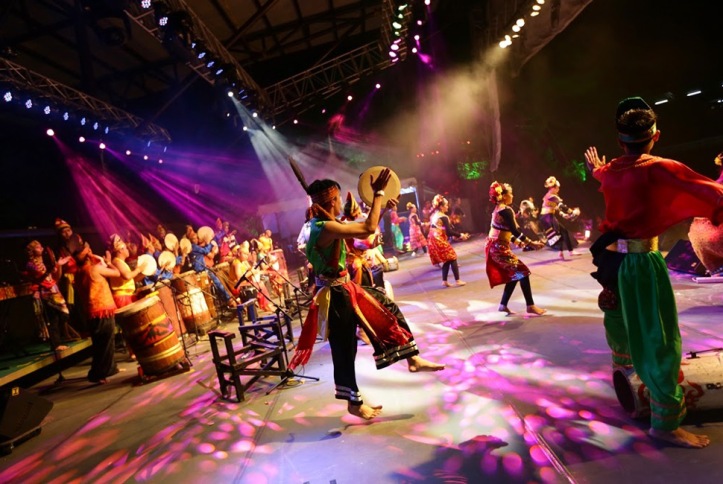 The coast turns the corner where the South China Sea is calm, the low tide more than tripling the size of the beach and revealing the smooth stones that dot the shore. The sun had come all the way up now, the sky changing from purple to light blue, and I could see the tree-covered saddle of Mount Santubong in the background towering over the stages of the Rainforest World Music Festival, set in the Sarawak Cultural Center on the forested coast of Malaysian Borneo.

Before, when it was still dark, I sat on the floor of an Iban longhouse, perched up in the canopy of the rainforest. The traditional dwellings of Borneo’s Iban tribe, longhouses resemble oversized tree houses that sit upon stilts in the jungle. The active ones still present throughout Borneo typically house over a dozen families, and a visit is like taking a trip into your grandfather’s toolshed, everything with a purpose and place. This particular longhouse, just steps from the two stages, was being used as a hostel during the annual three-day festival. It held a backstage atmosphere after the performances were done for the night, a place where the bands and backpackers — both from all around the world — gathered on bamboo mats.

I looked around the open-air room. There was a clean-cut guy from Spain, a fiddle player from a Canadian bluegrass band, a group of backpackers from Kuala Lumpur, the lead singer of a French a cappella group, and a few Irish gals who said the whole night had been “good craic.” Guitars, hand drums, tambourines, a didgeridoo, and beer cans. The French singer picked up one of the guitars, and a woman from Kuala Lumpur broke a piece of wood into two and began to bounce a beat off a two by four. The lyrics were all in French — which hardly anyone in the room spoke — but a few people, myself included, got up to dance anyway.

Read the rest of this story on Gear Patrol.