Not Your Father’s Huntsville

Standing there in the brewery, smelling the cooking pizza and hearing the heavy-metal inspired riffs of Rage Against the Machine, it was clear that I had stumbled upon a revolution.

It was a stark contrast to what I remember about the drive into town: the road winding its way through farmland, passing fields and tractors and, most noticeably, church after church after church. It was hard to believe that, given Alabama’s strong traditional roots and notoriously archaic liquor laws, Huntsville had become a bubbling beer town.

But with God as my witness, there it was, all right in front of me. Not only hadYellowhammer Brewery opened a taproom on par with anything you’d find in Denver or California – completely decked out with kegs as urinals and two brick ovens as part of a pizza shop – but its barrel-chested employees were unkempt and listening to a band that once protested parental advisory stickers by going on stage wearing nothing but mouth gags.

Indeed, it is not your father’s Huntsville.

Yellowhammer Brewery General Manager Ethan Couch said Huntsville has been steadily improving as a beer destination over the past half-decade, with a large leap coming in 2013, when Alabama’s Free the Hopsmovement was successful in pushing legislation that allowed craft breweries to have taprooms. This decision snowballed into further progress over the years, with the latest victory coming in late spring 2016 when the state allowed craft brewers to sell to-go beer for the first time. Whereas there was only one craft brewery in Huntsville in 2009, there are now eight, Couch said. 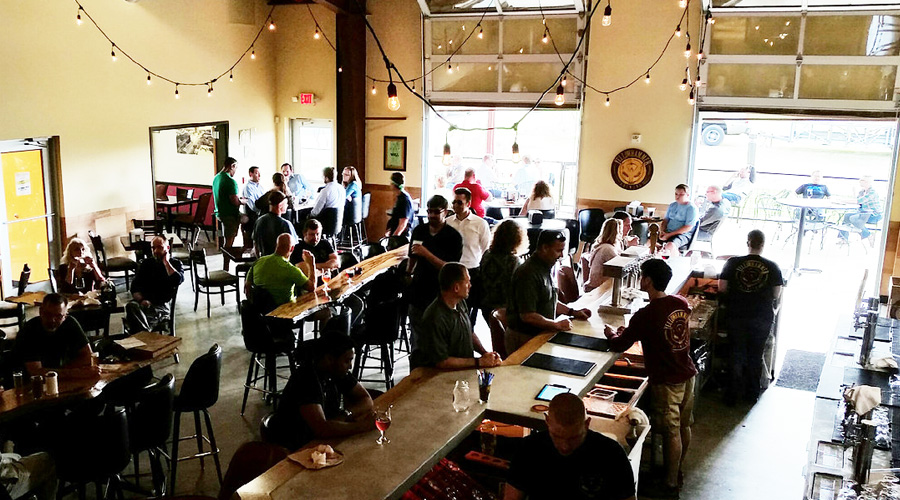 The story picks up in the present day, where three of those breweries, led by Couch, have banded together to continue the rebellion, to create something the city – and really the state – could have only fantasized about previously: A one-stop, walkable “brewer’s row” for beer lovers.

The dream began back in 2014, when an abandoned middle school campus in West Huntsville was bought by a developer named Randy Schrimsher. His goal was to create a multi-use compound that preserved the history of the school while simultaneously serving as an entertainment center for the community. He named it Campus 805and began reaching out to retailers.

Couch, along with Dan Perry of Straight to Ale, was among the first tenants to buy space. Later, they brought Brent Cole of Salty Nut Brewery into the fold (Salty Nut moved into Yellowhammer’s old space just adjacent to Campus 805). Together, they imagined the complex as a central hub for beer lovers, where they could walk from one brewery to the next – a “brewer’s row,” as they came to call it.

“I’d been out to Colorado with Dan [Perry of Straight to Ale] and there’s a lot of breweries in the general area, but it didn’t seem like it was a forethought to have them all together or that they were working in conjunction so to speak,” Couch said. “I thought [Brewer’s Row] was going to be a neat thing for Huntsville. It would be a nice central place you could come, park, go place to place, catch bands or live music. I thought it was going to be a synergistic outcome where we were feeding off one another.”

Today, the three breweries stand within a couple hundred yards from each other. In the middle of Campus 805, between Yellowhammer and Straight to Ale, is a grassy plaza – about 90 yards in length, once used as a recreational field by students – that was turned into a public park last year. They built a multi-function event space that can hold concerts and festivals and support food trucks. There’s just one little detail left, and it comes back to those Alabama drinking laws.

Under Alabama state law, public consumption of alcohol can only occur in specifically zoned “entertainment districts.” So, Couch, in collaboration with the city, is petitioning the state to zone it as such, which would allow for the consumption of alcohol beyond the gates of the breweries individual patios (in Alabama, all entertainment districts are regulated by the state, not individual cities, so Huntsville needs the state’s signoff). Then, the space would essentially be an extension of the three breweries and other tenants, allowing customers to come and go and take beer outside with them.

“Once they fix the sidewalk and bike paths connecting us to the park, then you will be able to get a cup of our beer and take it to the park,” Cole said. “[The city sees] this as growing downtown, more entertainment, more stuff to do. I have a feeling in a couple years this whole area is going to be built out and an extension of downtown. Everyone’s on board with it.”

Couch said he expects the city to file the paperwork with the state within the next few months, and that it could be zoned appropriately by the end of the year or the beginning of 2017.

Campus 805’s success, and the resurgence of small and independent brewers in general, come in conjunction with Huntsville’s efforts as a city to make itself over. Couch complimented Huntsville for its on-going redevelopment plan. Not only have the beer laws become more lax, but downtown Huntsville is being revitalized with an emphasis on modern apartments, independent vendors and a renewed focus on walkability.

“Kudos to the city for keeping young people and their lifestyles in Huntsville,” Couch said.