Out of the Van and Into the Bush

Tracking elephants by foot in Zimbabwe, armed guard in tow.

We stop the car where the paw prints end and swing open the doors. The guide shoulders his rifle and jerks his head. I nod and take my place behind him, single file, staying close on his heels. The early morning light in Hwange National Park, Zimbabwe, is classically golden, and the terrain under my boots is sandy, the aftermath of an epic sandstorm that brought it here from the Kalahari Desert more than 100 million years ago.

When the wind comes through the trees, the guide is highly aware of it. He removes an old, travel-sized sunblock bottle from his pocket. He squeezes it, and a puff of ash comes out and waves with the wind, showing us its exact direction. We glance over our shoulders as we duck under a branch and enter the outskirts of the acacia grove.

For the first time, my feet are on the ground in the exposed African wilderness. I feel nervous. It goes against everything the traditional safari safety spiel has taught me: the idea of keeping my distance, of staying in the vehicle at all times so as not to be identified as human. There’s always been that fine line of separation, that comfort, however false, of sitting a few feet off the ground in a vehicle. 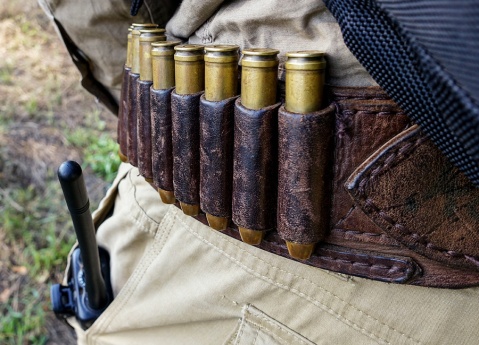 I hear an elephant trumpet in the distance and immediately turn and look at the guide for his reaction. Are we okay? Should we take off? He doesn’t flinch. Only food runs in the bush, he tells me. Now he very calmly raises his two fingers to his eyes, then points through the trees. I follow the imaginary line from his finger and catch a glimpse of the elephants straight ahead through the thick brush, about 50 yards out. The herd drifts as it grazes, and soon it is once again camouflaged by the trees. They are amazingly difficult to see considering their enormous size, but we are safe downwind, our scent undetectable.

We are deliberate in our movements, stepping over fallen trees and avoiding broken branches. The destruction is a direct result of Hwange’s booming elephant population, a statistical reality that is good news for tourists and bad news for environmentalists. In 2003, there were 19,000 elephants. Today, there are 45,000, and, as you might expect from such a large animal, their impact has been anything but subtle.

As we approach the acacia grove, I see that there are just as many trees on the ground as there are standing. Elephants eat tree bark and use the trunks as scratch pads, but the most damage comes when feeding their young. Baby elephants are still too short to reach the nuts on the trees, so mature elephants break the branches to the ground for them to scavenge or ram them to knock off the nuts. The comparatively brittle trees have no chance, and the amount that have been damaged, crushed, peeled, or fallen resembles the carnage of a tornado.

Seeing the elephant’s behavior up close is fascinating, but if there’s one thing I’ve learned from watching antelope, it’s not to keep my focus on one thing too long. My head, and certainly my brain, is on a swivel. There’s this constant, nagging feeling of vulnerability, that a big cat might be lurking behind me in the grass. The guide and I move on to follow the grazing herd, past the skull of a buffalo buried under a bush, a reminder that things die out here. We stop in a clearing, out of sight and downwind of the elephants. I can still hear them crushing the branches and ramming the trees, but I cannot see them.

If one were to make a list of the most inefficient organisms on the planet, elephants would have to be near the top. Their size and stature requires them to eat constantly, which in turn requires that they remove waste constantly. The guide squats down over proof: a pile of elephant dung. It looks fresh. He tells me that they “drop a load” every hour and a half. Then he grabs the dung and pulls it apart. Out comes a dung beetle. He holds it in the palm of his hand, and we examine it with a magnifying glass. Turns out, there are lots of organisms that like following elephants around. That list includes baboons, which are often seen breaking open clumps of dung in search of partly-digested seeds.

This doesn’t get me excited for lunch, but it does point to a valuable aspect of being on the ground in Africa. It’s a chance to see and learn about the little things, the ones that are overshadowed by the big picture when you’re up off the ground in a vehicle. The symbiosis within a pile of dung. The role of termites in the savanna. The small behaviors that together add up to an ecosystem. And, of course, the stress of being a living creature in the world’s most dramatic ecosystem, and what it takes to survive it.

Later that night, back at camp around the fire, the guide starts telling me stories. He brings up a time he had a standoff with a lioness, and the time he jumped into a river to evade a charging elephant. When I ask him if he ever had to use his gun on a walking safari, he shows his teeth and asks if I really want to know.