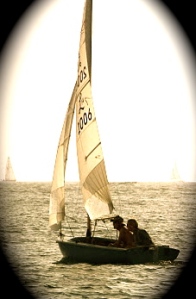 A part of me believes I have begun writing a mini-series, using a string of short stories to tell a larger tale.

Whenever I know, you’ll know.

For now, here’s a follow-up to A Night on the Green River.

Upon the Waters of the Green River

He steered the boat downwind, the boom swung out, sailing wing-on-wing with the jib out to the port side. The girl was there with him in the sunshine, the boat riding smooth on the teal water, the ride calm now going downwind, the mountains all around them in a complete circle. It was hot in the valley but the wind and the water cooled everything down. She had her bikini on, the yellow and red bottoms with the red top, and her shoulders were slick from the oil, her hair down, blonde but damp from before.

He had bought her back during the rainy season, off someone who kept her in his driveway, the water forming in pools on the sagging cover, dirt and leaves getting underneath and staining the benches. She had a fresh coat of paint now and the stains were gone and the blue hull was as blue as ever, light like the sky that day.

He had been hiking out earlier and sailing close-hauled with the main sheet nearly all the way in, but this time he stayed on the bench as he tacked back upwind and let the girl sit up on the side and lean out, her feet tucked in under the hiking straps.

“I better not fall,” she said playfully.

She leaned out, her upper body paralleling the water, and he could see the stomach flat and thin, no visible muscle definition, just flat skin connecting her upper and lower halves. Her legs were at an angle, very long and the muscles were tight and subtle. He saw the drops of water on her skin.

The girl smiled, her arms now outstretched and her hair flying free in the wind, and he could see her happy face. That makes me happy, he thought, seeing her happy. There’s a glimpse of forever, he thought, a glimpse of something very true and honest. That’s how it goes, he thought, it comes real close and then fades off. But right then it was there and he had noticed it.

“Pull it in and get up here with me.”

“Trim it in,” he corrected her. “You ease the sheet or you trim it.”

She laughed. “Get up here for a bit and then let’s have another.”

He trimmed the jib and sat up on the side of the boat next to her, the tiller now extended and the main sheet trimmed all the way in. When he put his under the hiking strap, their feet touched and he felt the energy rush up his legs. They were going faster now and upwind and the boat chopped against the current and showered them, the water coming over the top and side of the hull. The wind would gust at times and they would give leeway and he would arch himself out to compensate, or if it blew too hard he would gently ease the sheet out and right the course. But once he grew fatigued and wanted a break he eased the sheet and turned downwind and it was calm and she reached into the cooler.

She put her hand down into the ice and pulled out two beers and tossed one over to him. The can was cold and wet from the ice. He watched her open it and take a sip.

“Now all we need is to get you some rum,” he told her.

“Should be some in there.”

The girl checked the cooler and took the bottle of rum from the bottom of the foam chest.

“What am I supposed to do with this?”

She did not say anything.

The girl put the bottle up and let the clear rum hit her lips. She rested the bottle there, not gulping, letting it slowly seep past her teeth, eventually swallowing.

“For someone who wanted a chaser you sure let it linger.”

The girl passed him the bottle but he did not drink from it – instead he screwed the cap back on tight and picked up his beer. It too was icy cold and he felt refreshed and eased the main sheet out as far as it could go, put his feet up on the bench and held the tiller under his arm, his back to the transom. He dipped his hand into the water and ran it over his face, wetting his forehead and chin. His face was clean-shaven and his hair neat, trimmed at the sideburns and over the ear. He sipped the beer and looked forward and across at the girl.

The girl crossed over to the other side and sat on the bench just ahead of him. She lifted his legs, sat down, and then rested his legs on her lap, across her thighs. She had her hand on the top of his foot, the one closest to her.

She asked him, as if she was seeking solace, “Did you read about that poor woman who was murdered last week?”

“How awful,” she said, “I’m pretty sure she went to my high school.”

She was looking into his eyes for comfort but he was distracted, staring at his watch intently, wondering what was taking so long.

And then before she could say anything else the blood rushed from her face and she grew pale and passed out.